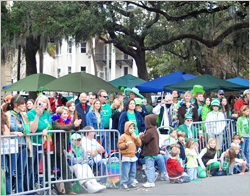 Parade patrons will not be allowed to set up in parks and squares until 6 a.m. Parade Day.

The only furniture allowed in squares are tables, coolers, lawn chairs and 10-by-10-foot tents. The following are among the items NOT ALLOWED in squares and parks: grills, amplified sound, kegs, scaffolding, advertisements, barriers, bartenders, private security.

All material should be removed from the square by 6 p.m. the day of the parade. The use of City electricity and water is prohibited.

Please be advised that it is against the City of Savannah’s policy to allow portable toilets to be placed in our parks and squares. We would remind you that portable toilets for private use are not allowed in the City Rights of Way, alleys, sidewalks or inside squares.