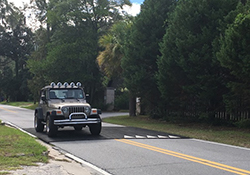 It is the policy of the City of Savannah to reduce the speed and/or volume of traffic through the modification of driver behavior in our neighborhoods. The goal of the Traffic Calming Policy is to maintain or improve safety and resident quality of life and livability by reducing the impact of vehicular traffic on residential neighborhood streets by modifying driver behavior through education, enforcement, and engineered traffic calming solutions.

The purpose of the Neighborhood Traffic Calming Program (NTCP) is to reduce crashes, traffic volumes and/or speeds; thereby improving pedestrian safety and creating more pleasant neighborhoods for the citizens of Savannah. Although neighborhood traffic concerns generally relate to excessive speed, pedestrian and bicycle safety, cut-through traffic, crashes, and general quality of life issues, this program recognizes the uniqueness of neighborhoods and that the critical issues and concerns vary from case to case.

The primary objective of the Traffic Engineering (TE) Department is to move vehicles in a safe and efficient manner. The purpose of this Traffic Calming Policy is to both support that objective and address other quality of life concerns as they relate to vehicular traffic in neighborhoods. 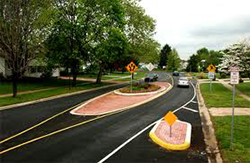 Traffic Calming involves physical alterations to road geometry to reduce vehicle speeds and/or decrease cut-through traffic volume, as a means to improve safety for all users.

While both traffic control devices and traffic calming measures may have common purposes (slowing traffic, channelizing traffic, etc.), they are different: